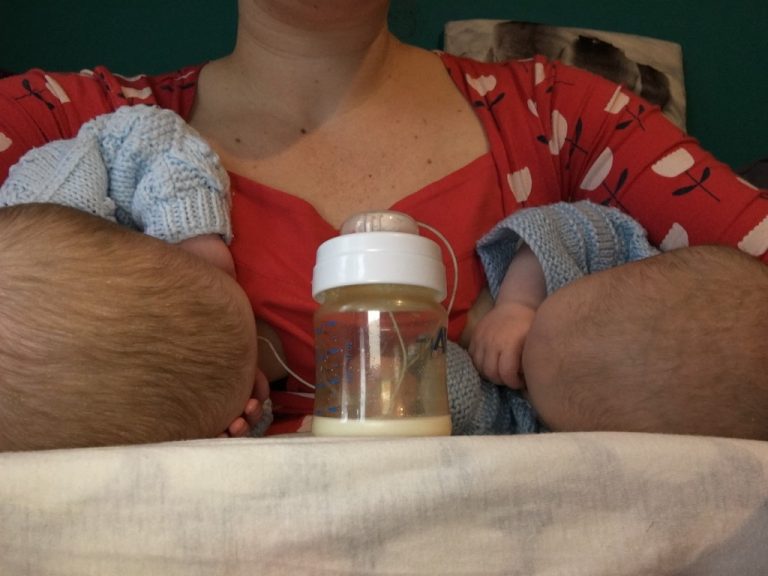 When I speak to expectant multiple parents, many assume that they will have to combination feed. Our society, friends, family, and health professionals all believe it is difficult, even impossible to make enough milk for more than one baby. However with good breastfeeding support and frequent and efficient feeds, most find they can make enough milk for their babies. I usually suggest to give breastfeeding a really good go to start with as it is far easier to move from breastfeeding to formula, than it is from formula to breastfeeding.

Around 40% of twin babies and nearly all triplet and higher order multiples are born premature or unwell and have to go to the neonatal unit (TwinsTrust, 2020). In this situation the breastfeeding journey is started via expressing colostrum and breast milk and feeding via a tube. Frequent pumping with a hospital grade double pump will give the best chance of establishing a copious supply (Hill, et al., 2005) But as the babies grow and become more efficient feeders, milk supply is easier to establish. There seems to be little research into whether there is a window of opportunity to establish a full milk supply. It is certainly possible to increase milk volumes several months into their breastfeeding journey.

The majority of twins are born around 36 to 37 weeks gestation. This can mean they struggle initially as even though a twin pregnancy is deemed as “full term” at 37weeks, the babies are not full term babies! They can be quite small, sleepy and inefficient on the breast to begin with (Ayton, et al., 2012). These babies sometimes need topping up with expressed milk or formula after a feed to start with, often called triple feeding. Parents start by breastfeeding the babies, topping up with expressed if they have it, or formula if they don’t by cup, syringe or bottle, and then double pumping with a hospital grade pump. And they should be doing this 8 times a day, every 3 hours. This is a very intense regime and many struggle, especially with the pumping element.

But again as the babies approach 40 week gestation, they are often feeding more effectively and top ups can be gradually phased out. Sometimes one baby may establish breastfeeding more quickly than the other and this can prove a bit of a juggle.

Multiples that are born closer to full term are likely to struggle less with breastfeeding, and so as long as the parent are supported to feed frequently with optimum positioning and attachment, the breasts should be stimulated sufficiently to make enough milk for more than one baby. Tandem feeding can often help make feeding more efficient and will help the parents cope with fussy behaviour and cluster feeding.

There may be a point where the family think they are at maximum capacity for breastfeeding and milk production, whether this being sometime in to the journey of establishing supply, or after a full supply has been established. This can be because of physiological reasons for not being able to produce enough milk (this is actually pretty rare), a difficult start with breastfeeding where milk supply was never fully established, or for other reasons to do with mental overload.

Combination feeding can be a good option for these families. It is so important to value every drop of breast milk these families can give. Formula can be a good tool to prolong the breastfeeding relationship if used in a considered way.So many families start by breastfeeding and then topping up with formula. However this is not really something that can be kept up long term. Feeding both breast and bottle every feed can be too much work, especially once the partner has gone back to work. If there are physiological reasons for low supply, using a supplementary nursing system can be a great option. The babies can be topped up at the breast and so the breastfeeding relationship is protected and milk supply will be maximized.

Many families prefer to give one or two set bottle feeds of formula a day and breastfeed responsively in between. This pattern is often suggested when the babies are struggling with weight gain and some families choose to keep it long term. It is protective of breastfeeding as long as the babies are being breastfed responsively the rest of the time, and the parents don’t fall into “the top up trap” when babies are fussy or feeding more frequently. The top up trap is when as babies need more milk, more formula is offered, and so babies come to the breast less. This then means less milk is produced by the breast which then means more formula is needed. And so on until the babies begin to refuse the breast because of a low supply. So breastfeeding responsively in between the bottle feeds prevents this from happening. If the bottle feed can be given by someone other than the breastfeeding parent, this can be a good way of having a break, getting more sleep, or spending more time with older children.

For triplet families, as well as the twin related scenarios discussed above, there is also the issue that there are more babies than breasts! Various patterns of breastfeeding, expressing and formula feeding can be adopted. Some triplet families prefer to breastfeed each baby individually. This becomes more doable as the babies become more efficient on the breast and feeds shorten. Many exclusively breastfeeding triplet families tandem feed two babies together and single feed the third, and rotate the pattern. Some prefer to tandem feed two babies and express milk feed the third, pumping after for the next feed and rotating the pattern. Or they can single feed one baby and express for two. Some prefer to combination feed with formula. They can tandem two babies and give formula to the third, and rotate. They can single feed one baby and formula feed the other two. Some prefer a similar pattern to twins where they exclusively breastfeed for some of the day and give a couple of set bottle feeds. There are all sorts of combinations. And for higher order multiples, similar patterns can be adopted.