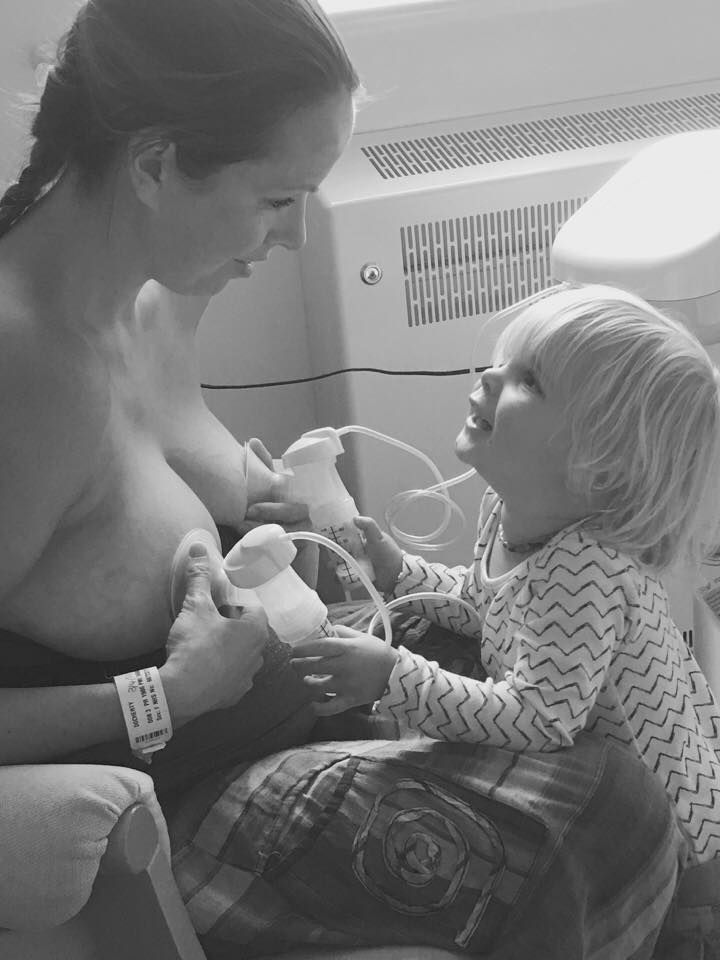 Not one to do things by half, I was very fortunate to conceive in February 2017.  With an already 18 month old and just turned 3 years old nurslings, I was very aware of the forthcoming task ahead.  With the world’s average self weaning age being between 2-7 years old, I realised that this pregnancy and the changes in milk taste could lead to my eldest and possibly my (now) middle child’s end to their breast feeding journey.  Though, equally I had already fed throughout one pregnancy and managed (purely at the grace of hormones) to maintain supply.  I could do it again couldn’t I?  The longer I have nursed, I’ve received increased disapproval and adoration.  Society and the culture in the UK is sadly a little detached from our mammalian purpose… I admit there was a time when I myself was uneducated in the value of breast feeding , and I remember thinking, ‘surely its wrong to feed a baby who can walk up to the mum and lift her top to ask for milk’… oh the irony…I spend much of my home life with my top and bra straps dropped down ready for quick presentation of boobs when needed.  Here I was, feeding two walkers with a growing belly.

Wowsers! there’s nothing like the bedtime nursing session and pregnancy to completely zap all energy.  I was shattered each night but was generally having undisturbed sleep now that both nurslings seemed content to snuggle with me instead of nurse during the night.  (This wasn’t a process I could rush, and my husband and I very much went at their pace. My second baby needing to have hold of one boob though the night as if to confirm ownership).

My eldest had always required a bit of support (in the form of one hand shaping the breast to ensure a deep enough latch ) to feed due to a tongue tie. My confidence with feeding her in alternative positions was limited to ‘needs must’ like during mastitis and blebs, all part and parcel of feeding tongue tied babies.  So sticking with her in cradle position and my second being too fidgety in rugby hold, meant I limited tandem feeding sessions for when their toddler melt downs meant there was not other option. Generally though, they took their turns in stead.  I have no idea how to parent without breasts. I nursed them both to sleep and transferred them to their beds. Tantrums, toothache, bumps and falls, were all solved with boob.  Yup, I not thought of how I was going to do all that with number 3 in my arms too!

Time came around to the 12 weeks scan at the end of April. My belly had really popped, though I was managing to avoid telling people about the pregnancy, preferring to have the reassurance of seeing the baby for real first.  I lay down on the bed in the sonography room, and all I see is black, an empty black space on the screen. I cupped my face and begged the sonographer in panic, “Please tell me there’s something in there”.  He flits the camera over my belly back and forth, my husband and I staring up and the screen holding our breath.  The man turns to me, his eyes sparkled and he said, “which one do you want to see first?”…

There you have it, the moment we realised we were now a family of 6.  The logistics of this wasn’t thought out until the time the babies arrived.  There was only so much we could plan for because a multiples pregnancy & delivery had too many potentials.  Heading into the Summer months helped burn off the children’s energy running around outside whilst I could sit and catch my breath, the weight of this pregnancy and my reduced lung capacity impacted on our usually active life.  My bulging belly made nursing increasingly awkward and uncomfortable.  And there was the joyous hormonal zinging pain lasting throughout the feeds, even with deep exaggerated latches.  All feeds required mental strength to complete but I treasured them.  I didn’t know if my supply would dry up, whether if it did, my babies would be happy to dry nurse, or how often I’d be able to nurse them once the twins arrived.  So many questions and none of which there were answers for. I carried on feeding as we were but asked the children if we could change the bedtime feeds to earlier in the day time so I didn’t need to try and roll around getting in and out from their bed. People say how resilient children are and my two were the true example of it.  By keeping the option of nursing available to them, it meant they were reassured and unphased by the impending changes.  My supply dipped around 22-26 weeks, my eldest said the milk tasted like strawberries (I think she meant sweet) but that there wasn’t much (handy when they can articulate to you exactly what is going on isn’t it?).  My son would latch and get bored from wasted effort at the measly offerings.  But the three of us stuck with it, dry nursing, hormonal nipple pain and taste changes, along with a persistent bleb, ensuring if their nursing journeys were to end, it was by their choice.  I felt it would help with bonding all the siblings and curbing my mummy guilt of having another baby/babies.

The twins arrived at 34 weeks after a speedy delivery where I arrived at the hospital with about 10 minutes to spare.  This meant the twins required some support and our hospital stay lasted 12 days.  Having nursed my big 2 to sleep literally 90 minutes before the twins arrived, to be so swiftly separated from them for an uncertain amount of time was, for me, distressing and draining, but their strength and preoccupation with Grandparents meant I was met with beaming smiles and kisses each day they visited.  I’m no psychologist but I can only assume children are protected in these scenarios by the ‘out of sight, out of mind’ concept.  The members of family who assisted with childcare said I was barely mentioned, which is obviously great, but being typical mum I punished myself still for not being there for them.  The fact they were still nursing was of huge help.  Here I was in hospital with two babies who weren’t able to nurse directly, pumping and hand expressing for them around the clock.  I became engorged when my milk finally came in. BLESS THOSE TODDLER/OLDER NURSLINGS! They swooped in to my rescue.  Although tender to touch, the relief from my older two, drawing out the blocked milk from my inflamed ducts was awesome.  For this reason alone, continuing to nurse them throughout pregnancy was well worth it.  This gentle transition between them meeting the babies in incubators, to cuddle opportunities, to coming home, all the while still having ‘boobie’, I believe, secured a united family bond.  It took another 3.5 weeks to have the twins off tube feeds of expressed milk and able to feed directly, but my older nurslings supported me, the expressing mission I endured and how their nursing sessions needing to fit in after a pump sesh.  I was bound to my bedroom nest and they would run in with newly sterilised milk pots from Daddy.  A support network is imperative for any breast feeding journey, but having my children at the helm of this was awesome.  Communicating clearly from the start how, “the babies need the mummy milk to get bigger and then they will be able to play with you”, and “you can eat food but the babies can only have mummy milk”, has helped even my 2 years old’s understanding and we’ve dodged any jealousy of how my time is used and more so how unavailable (by comparison) my breasts are.

Whilst the twins were tiny, their little mouths and shallow latches, meant their effectiveness at milk transfer was limited. Except, I had a couple of useful tools to help establish my supply.  In hospital I’d been advised to use the hospital grade double pump, and power pump as much as possible.  Well, with this in mind, by tandem feeding one of my older two with one of the twins, the let down was brought on in both breasts, reducing the energy the attached baby required to use and increasing the milk they received.  Every bit of stimulus my breasts received worked towards increasing the supply to service the twins who would eventually need to feed directly from me, and I was needing to stay a step ahead to keep them on my milk alone.  Some medical professionals were confused about the science of breastfeeding and felt my older two would be “taking the milk from the babies”, but I knew and valued the importance of demand=supply=demand=supply.  In the long run the twins’ muscle strength and latch would mature enough for them to manage and feed independently. For those initial weeks of learning, to have this inclusive way of feeding, I’m sure became fundamental to our overall success as well as minimising any negative impact that can be experienced when introducing a new born into the family and transitioning siblings to their new ‘big’ brother/sister role.

The expectation upon older siblings are immense and the huge changes mine went through to bring home premature twins were not to be underestimated. Ultimately though, by making them part of the survival plan, communicating through pregnancy about the how booby time will change but emphasising they very much have the choice to continue still and by ensuring my support network of my husband, the Grandparents and friends, I was happy to take on the ‘rods for my back’ I had willingly installed, even down to co sleeping and cuddling the big two until they were asleep. We are now 4.5 months into our ‘nursing 4 under 4’ journey, directly feeding the twins at the breast and tandem feeding in various combinations as needed. As mums we worry about how we cope, but as a twin mum, this statement  rings more true. A friend said to me, ‘just take it 10 minutes at a time’, and when I feel like the dysfunction level is reaching a high, I remember this.  Often 10 minutes later, one or both of the twins has nursed to sleep or has settled in the sling. Or my daughter has allowed me to brush her hair, or they have finally put their shoes on. It’s all little things, but it all passes. The evening cluster session can start any time from 3pm and tends to last until 8pm. But whilst tandem feeding the twins I can use pillows to assist with positioning enabling me to free my hands, so I can do story time with the older two and assist with getting changed for bed.  So for all the worry and mummy guilt we put ourselves through, know this: It can be done! Our bodies are amazing and so are our little nurslings, no matter how many of them there are.