Exclusively Expressing For My Twins, by Sam Osborne 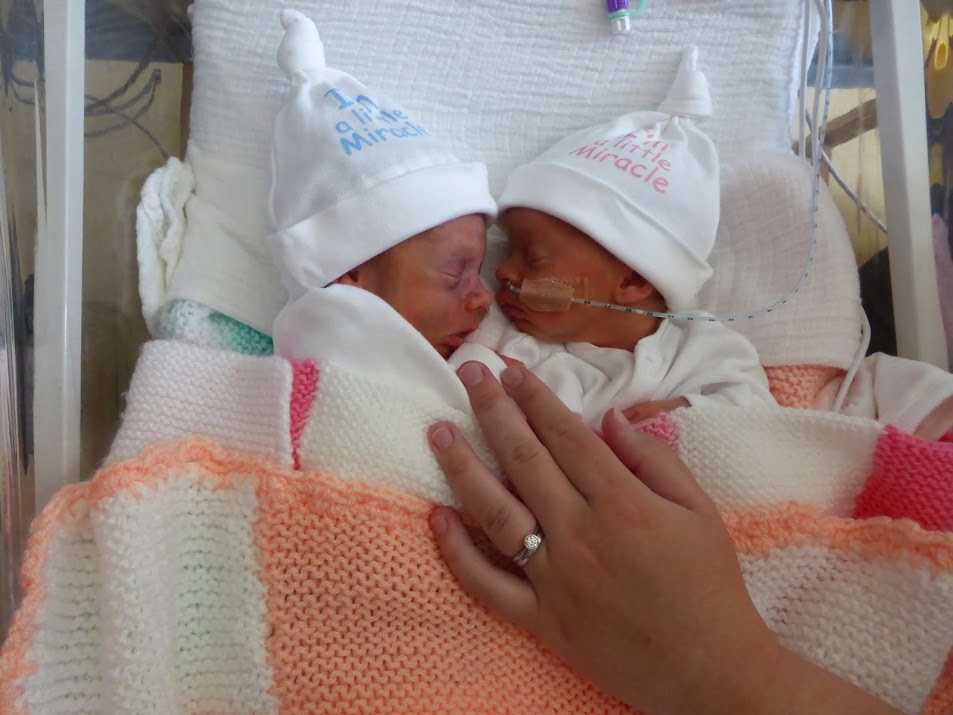 I was pregnant with twins, and I was going to breastfeed. I was determined and didn’t even buy any bottles! However, I also planned on giving birth to healthy, full-term babies with a strong instinct to root and latch. Instead I went into labour at 31 weeks and pushed my tiny, fragile twins into the world. They weighed 3lb each and were taken straight to NICU. I then had some complications, need a spinal block and manual removal of placentas and I didn’t get to see my babies for another 7 hours.

I knew they would be too small to breastfeed for at least a month or more, so I was given syringes, collection bottles and sterilising tank. I was shown how to hand express and given a pump which had a special preemie setting for collection of colostrum. This allowed me to express my first colostrum for my babies which they received down their nasal-gastric tubes. Two hours later I hand expressed again and then hooked up to the pump, but I barely got a drop. The NCU staff reassured me that this was normal and not to worry, my milk would be in soon. They explained that removing the colostrum AND nipple stimulation were just as important to establish supply. I personally found hand expressions quite tricky, especially with large breasts and when sore and tired after labour. So I hand expressed and then sat back, relaxed and watched my beautiful babies whilst I pumped and sent all the right messages to produce plenty of milk. The staff explained that George and Elsa were too small and poorly for formula milk, which would be hard on their delicate tummies and also put them a t increased risk of developing a very serious bowel disease called NEC. I signed a form to give my consent for my twins to receive donor milk. I will forever be grateful to the woman or women who fed my babies for those 3 days. My milk came in on day 4 and I was elated to see streams of milk flowing down the flanges and plopping into the bottles. I hired a hospital grade pump and expressed every 2-3 hours round the clock getting up at least twice every night. I was producing far more than my twins needed so my Mum bought us a second freezer for the garage, just for the milk!

After a month in NICU, my daughter was latching well and taking bottles of expressed breast milk (EBM) when I went home at night. She was discharged and came home to us, leaving her brother in hospital, which was very bittersweet. My son had issues where he would stop breathing, his heart rate would slow he would go blue and then with stimulation he would right himself and pink up again. Feeding seemed to trigger these episodes, confirmed by his nurses and consultants. These episodes were very scary and I started to dread latching him on. George would begin feeding, then go very still, he would turn grey then blue, lie limply until I unlatched him desperately rubbed him until his would take a big breath again and the beeping of his alarm would go silent. These episodes knocked my confidence hugely and I preferred feeding him bottles of EBM as I could watch him more closely and feeds were over and done with quicker. Bottle feeding him was much less traumatic and after another week of him bottle feeding and gaining weight, he came home to join his sister.

I nursed Elsa and expressed for George. I tried to make this work but I found it difficult to feed on demand and pump by the clock. I started to feed Elsa EBM in bottles too. This suited us better during those early weeks and months and it allowed my support network to help out with feeds whilst I expressed too. At the time I didn’t think of what would happen long term, I took each day as it came. I (naively) thought I could get my babies back on the breast when I was ready and George had outgrown his breathing and feeding issues.

My mum and my husband were a great support at this time, both practically and emotionally and I think they enjoyed helping to feed them too. The twins gained weight beautifully and whilst our situation was rather unique, it felt like everything was falling into place. By 4 months old, George had completely outgrown his breathing issues, but they had forgotten how to latch and I didn’t have the emotional energy to keep trying and ’failing’ at getting them to nurse. Instead I carried on pumping and slowly became a proud exclusively expressing breast feeder. By 7 months I was expressing 5 times a day (morning, bedtime and during each of their naps, even when out and about!). When they dropped a nap, I dropped a pump, I didn’t want pumping to interfere with our awake time together.

I had a large oversupply of milk which allowed me to I donate to several mothers in need. We would arrange collection of a large 1000-2000 ounces every couple of months. I donated to a lady with insufficient glandular tissue, a lady who had had a double mastectomy and another mum of twins who was nursing one baby but the second couldn’t nurse due to a medical condition. Breast milk is AMAZING stuff and it is very rewarding seeing other babies receive it, and getting to know women who value breast milk as much as I do. Watching my twins grow into strong and healthy toddlers also made it worthwhile too, they are a far cry from the tiny 3lb babies I gave birth to!

The twins are now 3 years old and I eventually stopped expressing milk for them when they were just over 2.5 years. In 2015r I trained as a Mother Supporter with the ABM and feel I can offer a great deal to mothers of premature or poorly babies who cannot latch, who need support and advice about expressing to maintain a supply until baby begins to feed efficiently. I am currently training to be a Breastfeeding Counsellor. Exclusively expressing, for however long you need or choose to do it, is hard work and requires determination and dedication – mothers need support during this time, I hope I am able to provide some of this support to them and let them know they are doing a fantastic job.