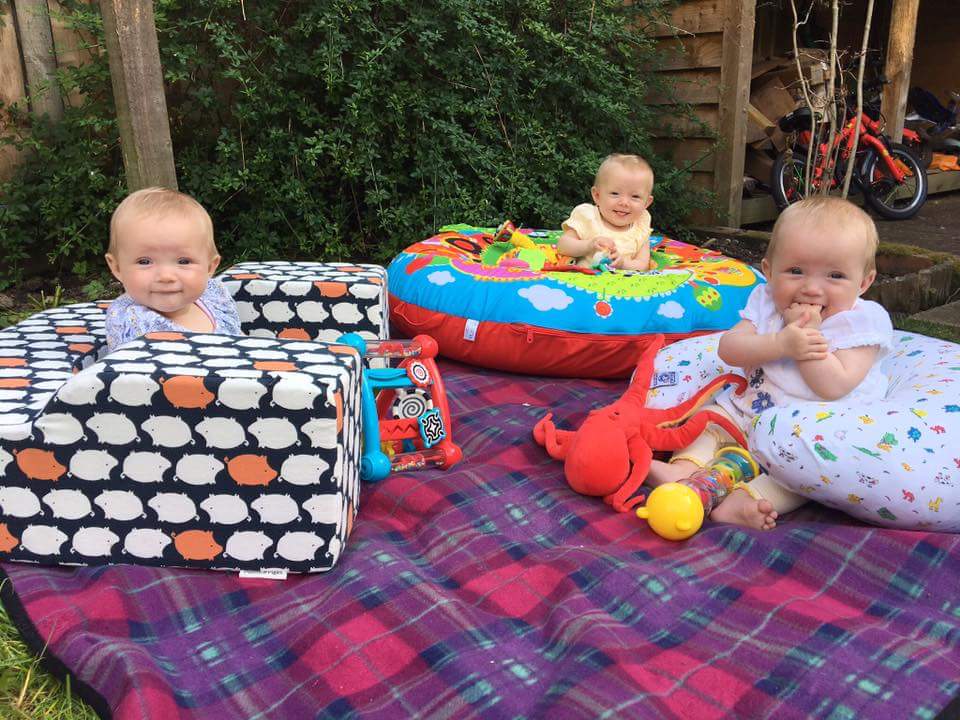 Twins, I can understand twins, you have two babies, two arms and two breasts. The maths just works. But THREE babies! Where do you start with breastfeeding triplets? Joanne said: “My first thought when I found out I was expecting triplets was: “oh no I won’t be able to breastfeed them.” But after lots of research she found others have breastfed their triplets.

But why one earth would you even contemplate it? Well firstly there is obviously all the health benefits for mum and babies. And triplets are much more likely to be premature so these health benefits are even more important. But once breastfeeding is established, it is so easy. Don’t get me wrong, having triplets is hard, but it’s hard whatever way you feed them! Breastfeeding means feeds are always ready to go, no preparation, you won’t forget your boobs when you go somewhere, you don’t have to get out of bed to do the night feeds, and once they are older it is a really nice way to get some one on one time with crawling babies, and later there is no better way to subdue a tantrum! And it’s free! Although you may have an increased food bill due to how hungry it makes you! The reasons to breastfeed three babies are just the same as the reasons to breastfeed one or two.

I asked some of the triplet families on Facebook what would be their top tips.

Firstly, believe it is possible. Sue said “my body grew three babies, it can feed three babies”. And as with all breastfeeding, believing it is possible and trusting your body to produce what is needed is so important. As is having health care professionals who are on your side. Natasha said “I’d also recommend making connections with the hospital lactation consultant before your babies are due. Mine came and saw me 2 or 3 times a week when the boys were on SCBU and when we returned to our booking hospital 3wks after the boys were born she was there ready and waiting for me. We struck up a real friendship and she had my back the whole time. She was knowledgeable and empowered me to stand up to others who thought it wasn’t possible. She also helped educate me around bottles/dummies/kangaroo care etc which was great and helped me make informed decisions.”

The majority of triplets will be born early and end up in the Neonatal Unit. So mum should be prepared to start your breastfeeding journey with a breast pump, expressing every two to three hours round the clock to establish a copious milk supply. Once mum is discharged home she will need to hire a hospital grade double pump and continue this expressing pattern. We will shortly have a more in depth blog on pumping so watch this space! Once babies begin to feed at the breast, pumping can begin to reduce. Our other blog Transitioning a Premature Baby Onto The Breast is a good read of how to move from expressing for your babies to breastfeeding them when they’re discharged home.

Being educated in how breast milk production works is really important as mum will need to maximize her milk-making potential. For triplets the breasts receive three times the stimulation as from a single baby. This means the breasts are drained three times as often. This in turn promotes them to make three times as much milk. The more you feed the more you make. The hardest thing is finding the time to do this and some time to eat and sleep too! And you will be incredibly hungry. Breastfeeding one baby takes around 500 calories, so we can assume that three babies take 1500 extra calories! Having healthy snacks and lots of fluids will make you feel like you have enough energy to do this, although it probably won’t directly impact your milk supply.

Get support with positioning and attachment i.e. getting a good latch. For small babies it is so important to ensure they are latched on well so they can feed as efficiently as possible. They get tired very easily. Breast compressions can help get a bit of extra milk into them during feeding. Also vital for mum too as this will help prevent sore nipple and blocked ducts. When you are trying to feed three, you need to minimize the chance problems.

Some mums prefer to tandem feed two babies and then feed the third, rotating who gets the individual feed. Others prefer to tandem feed two and give a bottle of expressed to the third, rotating who gets the bottle each time. Or some prefer to breastfeed all three separately to get some individual time with each baby. Or maybe do more expressed feeds and less direct feeding. There is no right or wrong way to do this. It’s whatever suits you and your family best. And you can change what you do for different times of day or for different stages of breastfeeding. So keep an open mind and be flexible.

Many expectant triplet mums wonder how they will get the time to do everything. Will I ever sleep? The truth is you can’t do everything. So prioritize and delegate! If a mum is breastfeeding then she needs to prioritize that over everything else. Get help with all the things that anyone can do! Another pair of hands can be useful for general baby care; nappy changing, baths, feeding top ups, settling when they are cranky! Also help with the housework is a must in the early days. If family and friends can’t help out then it might be worth spending some of the money you are saving on formula on buying in some help. And the rule for visitors is that the must bring food and do one household chore before they are allowed a cuddle of the babies!